Friends Kirby kenny and Doug Freeman from high school days in Hardin
Montana and I spent a couple days in Moab at the cabin. Kirby and I caught up on 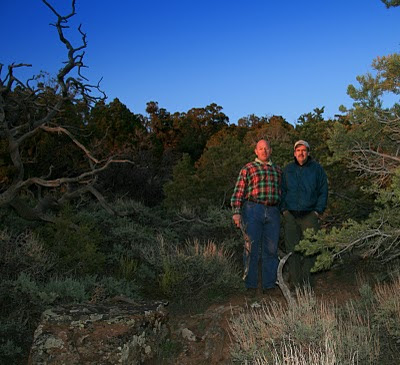 the last 25 years since seeing each other. Fun to hear of the families that didn't exist the last we saw each other. Kirby is seen here sporting what he called his
favorite shirt. Unfortunately the shirt did not survive the two days of dirt biking as he used it for his riding jersey. He rode my bike as it is equipped with skid plate, bark busters and other safety equipment designed to take a beating while I rode the rental bike he secured. Good thing, as he proceeded to gain confidence each hour of riding until the second day he was powering over rocks and ledges and crossing Kane creek flowing with water. With this confidence however came a certain over confidence and within 30 minutes I saw him entertain with two solid crashes and one head on collision with a river bank. Unable to decide right or left while riding in a foot and a half of water
up Kane creek he drove straight into a dirt bank and stayed upright due to a large tree root that protruded from the side. He then decided left and came out like a pro. Riding with some new found skill and attitude he wheelied over small obstacles and measurably increased his speed. He went down on the rocky trail and immediately spoke of how valuable the safety equipment he wore and how it was indeed the difference maker in confidence in riding. He picked himself up, brushed himself off and took off like a man on a mission to have fun on a dirt bike and trail. Coming over a graduated rise of rock he hit the throttle which pushed him back on the seat, which caused him to grip onto the handlebars, which include the throttle which caused him to wheelie into a vertical position. The bike jumped in the air then went left as Kirby went face first to the right. He hit the ground with such force that he actually bounced and then skipped two times before coming to a rest. The favorite shirt didn't make it, but bruised and a bit bloodied Kirby did. Doug renamed him "Skipper" A great time was had by all.