Thanks to my wife and son Dane for traveling and helping me swap out refrigerators at the cabin. The Eric Sondrup SubZero, a monster of an appliance had one of it's two compressors give up the ghost. Because guests were at the cabin, I felt it necessary to get a new one to the cabin immediately. I heard of the bad news on Friday morning from Farland, bought a fridge in the afternoon. Loaded it on the truck and left Saturday morning around 8:30 after picking up Dane. Susie was a good sport by coming along for a date and sitting in the little extra cab portion of the pickup. I needed Dane to come for his muscle. It took four adult men to position that subzero in and I was worried that Dane and I would be hard pressed to get it out.
We arrived in Moab around 5 and bought some groceries then headed up to the loop road with the new fridge standing upright in the pickup. Bart Jennings and his family were staying at the cabin and were good sports to let us interrupt their dinner in order to take out the old fridge. We dismantled as much of it as we could and between Dane, Bart and I got it out and into the pickup and the new one put in. 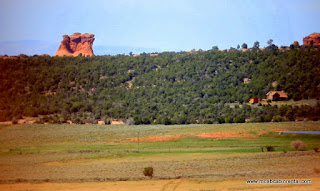 Our original plan was to spend the night in the love shack and take off early Sunday morning for home. We were done with our chore and on the way down to the love shack when I jokingly asked if they (Susie & Dane) wanted to go home instead of staying the night. They both thought it over and decided they preferred coming home. I was literally on the bottom bunk bed starting to stretch out when they said we were taking off. So at 8:30 PM we drove back to Phoenix. I drove to Blanding, Dane to Tuba City then me into home. We arrived as the sun rose over the mountains to the east of Phoenix. I was in bed by 6:00 AM and got up at 8:30 to attempt church but quickly realized I wouldn't make it, so back to bed. Slept until 11:30 and had a wonderful day recuperating from driving just less than a 1000 miles in 21 hours.
Posted by Moab Cabin at 7:24 AM No comments: 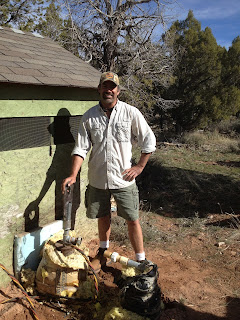 Danny Prickett of Castle Valley was my choice to replace the well pump and wire. Danny not only came in with a bid less than the competition, he saved me a bunch of money by spotting a mis-diagnosed problem from the competitor. Instead of a $1000.00 bill on this particular item it was $200.00 and then he went on to fix a leaky PVC pipe for free while he was there. This photo shows the well head which goes down 1060 feet and the special pipe extractor Danny fabricated to draw out the old pipe. This was a big job and Desert H2O was awesome. Did a great job and made a friend at the same time. I have used Danny on a variety of projects since this photo and each time felt he gave me a good price. With Danny's efforts we have a new pump, new wire, new automatic shut off and automatic cistern fill system in place. Owning the cabin just got a whole lot easier because of this. No longer do we have to hand fill and watch the water fill the tanks as they are all set up to automatically fill now.
Posted by Moab Cabin at 9:51 PM No comments:

Fall colors in the Blue Mountains

Led by Dan Sheran from Monticello Utah a group of us rode the Blue moutain range and experienced one of Natures divine miracles. The Fall change of colors amongst the forests.

While I have always been disappointed that this change lasts for such a short time, it serves to appreciate it all the more. Photos do not do it justice, but serve as reminders of how beautiful the Blue Mountains are.
Posted by Moab Cabin at 9:33 PM No comments:

Grandson Vander Castle, once he knew I was taking his photo managed to let out a giggle and kept me occupied for over an hour as he would walk the entire deck like a tiny soldier doing parade drill. Through the front door, across the living room, out the back door around the deck back to me, sit down, wait for recognition and start over. He did this for an hour keeping us both amused.
Part of the fun of the cabin is to have family and loved ones get to know each other in a setting that is getting more difficult to experience. I grew up in the 1950s and 60s during the great love affair families had for traveling the open road and camping out or staying in a cabin somewhere along the way. Our grandkids all live in large cities and Susie and I wanted to provide some sort of get a way that they could enjoy without all the nonsense of a theme park. So far so good. Vander didn't even bother to put on shoes. The cabin is a link of sorts from my youth to today's youth. 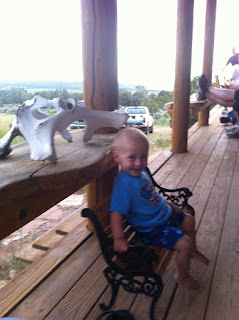 Posted by Moab Cabin at 9:32 PM No comments: 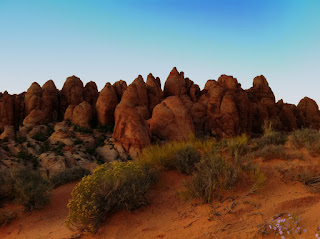 One of the iconic scenes on the "Behind the Rocks" trail just West of Moab. this trail is rated fairly difficult from beginning to end due to a couple of gnarly spots but most of it is intermediate and a bit sandy. Two of us did not have working headlights on our bikes as we rode this trail which made for the return trip back down the trail in the dark and all the way up to the cabin a bit of a challenge but everybody made it safe and a good time was had by all.
Posted by Moab Cabin at 9:27 PM No comments: 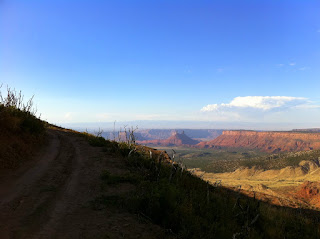 This view is from the trail near the whole enchilada. Looking North into Castle Valley you can see the remnants of the first fire the area has had in many years. A stark contrast from the dark black wood stocks of scrub oak and newly sprouted green undergrowth to the red cliffs and blue skies over Castle Valley. These views are unequaled in all the world. This is unique to the Moab area and everyone should witness this while living. It is very close to the cabin and similar views can be seen from hiking trails, biking trails and jeep roads so there is really no excuse not to see them.
Posted by Moab Cabin at 9:26 PM No comments: 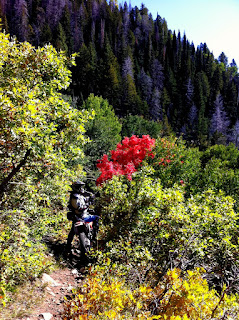 Up in the blue mountains (south of Moab near Monticello) on a single track trail that winds it's way up and down the mountain we came across this maple tree amongst the scrub oak. It was in full Fall regalia. Such a small thing but the therapeutic effect it has on the soul is enormous. This is Paul Ricatelli on the bike. One noticeable feature of Monticello Utah is the friendly and warm welcome residents extend to bikers. Their trails are groomed and waiting for responsible riders to enjoy. That is appreciated.
Posted by Moab Cabin at 9:20 PM No comments: