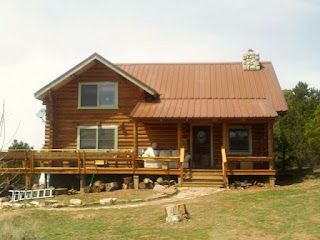 A NEW METAL ROOF
The final product. Bunger Steel roof of rust color put on by Clark & Steve of Darkhorse leadership. The deck roof line that used to have a sag to it has been straightened and a new metal roof put on. This was a project that was over a year in the making and a lot of helpful private businesses made it happen. It started with Jason Swim of Arizona Native Roofing here in Phoenix, Sergio at Bunger Steel, Scott Hatch of Topline builders and finally Clark and Steve of Darkhorse leadership. In the following posts you can read a bit more about the project and view the websites of the folks mentioned. I thank each one of them and recommend their goods and services without hesitation.
Posted by Moab Cabin at 3:16 PM No comments: Links to this post 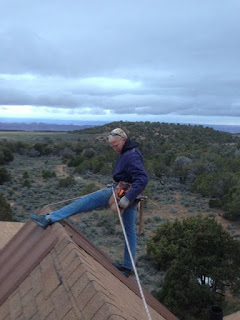 Not just anybody is nimble or knowledgeable enough to perform this maneuver for an entire steep angled roof line. Steve demonstrates the perfect blend of canyoneering technique with roofing expertise.

Posted by Moab Cabin at 3:11 PM No comments: Links to this post

We lost almost an entire day to some unexpected weather on of the days. A somewhat late but predictable snow storm came out of the mountains and laid down quite a blanket. It was not just snowy but pretty cold as well. Clark and Steve did lose most of the day but nary a discouraging word was heard.
Posted by Moab Cabin at 3:07 PM No comments: Links to this post

There were some crazy steep angles to this project and beyond the capacity of a homeowner do it yourself type effort. Here Clark and Steve are in harms way, yet tethered via their canyoneering safety gear. This was a project I at one time contemplated doing with some family and friends. As I watched these guys work, I realized it was a pipe dream to think anybody but pros could do this correctly and safely. I am very pleased with their work. 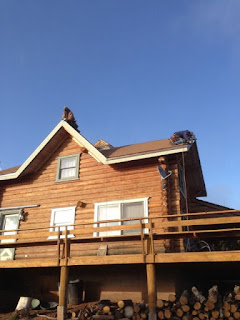 Posted by Moab Cabin at 3:04 PM No comments: Links to this post

Clark & Steve did more than just roof the cabin, they shimmed the support posts in order to straighten out the "sagging" look to the front deck roof. They worked from morning until past sundown each day for a week and I never saw them rest. They were working fools for sure. In a good way. Friendly and knowledgeable, both of them really were a pleasure to work with. 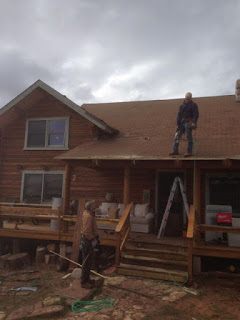 Read more »
Posted by Moab Cabin at 3:00 PM No comments: Links to this post 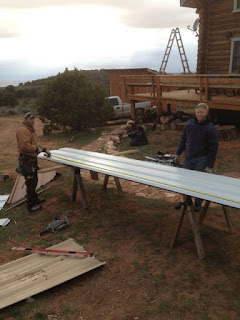 Clark Wiscombe and Steve of Darkhorse Leadership http://darkhorseleadership.com were the key component of making this roof project happen. Referred by a good friend Scott Hatch of Topline builders and precast concrete, Clark and Steve are certified canyoneering guides. They have backgrounds in home construction and metal roofs so while I had a variety of other bids, I chose these guys because once again they came recommended and had experience in the trade of metal roofs. This became obvious as they began unloading and laying out per a pattern that Rudy from Bunger Steel had made earlier. These two guys were awesome to watch. Both had energy to burn and worked as a real team. No wasted motion but an awful lot of it. I asked if it was doable with just two guys and they commented that they were a small crew but knew each other's movements and liked having just the two of them. As the project proceeded their expertise showed up time and time again. I give them my heartiest thumbs up.

Posted by Moab Cabin at 2:56 PM No comments: Links to this post 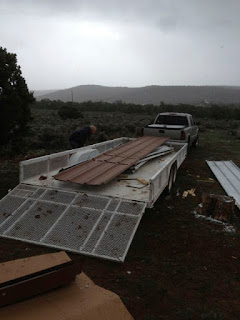 Selecting a roofing company was not easy but after researching prices, quality of product and referrals I chose Bunger Steel of Phoenix Arizona. Sergio was my sales rep and I really enjoyed his professional manner and expertise. He was helpful throughout the process and at one point told me that I had come in with the second worst set of roof measurements he had ever seen in his career. I asked who was worse than mine...his reply...hadn't met him yet but was sure he would someday. With the property being 475 miles away and the roof having a bunch of crazy angles on and to it, it was difficult to get accurate drawings/measurements despite a number of attempts. Finally with the help of Google Earth and a satellite photo of the property Sergio was able to piece together his best guestimate of what was needed and the associated cuts. Turned out he was right on the money and Bunger Steel and Rudy get my highest recommendation. www.bungersteel.com
I hauled up over 4ooo pounds of steel roof and supplies behind my new (used) diesel pickup and it also performed like a champ untill just outside of Blanding. The onboard computer gauge indicated I had 77 miles of fuel remaining so I passed Kayenta without filling up. Mistake. The gauge is off. I ran out of fuel, hitchhiked into Blanding at 10:20 PM, bought the only one gallon fuel container left at the only open convenience store, hitchhiked back to the truck with one a half gallons of fuel, called Dan Sheran for instructions on where to find the inline hand pump and was up and running fairly soon.
Posted by Moab Cabin at 2:46 PM No comments: Links to this post 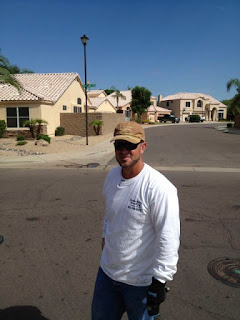 Jason Swim of AzNative Roofing arizonanativeroofing.com was a tremendous help when it came time to put on a new roof at the cabin. He is successful roofer in

Phoenix Arizona and has worked on my roof to the point that I trusted him and any advice he gave me. A classic case of saving
money by spending it correctly to begin with. His guidance trimmed the final cost of the project and his willingness to help is really
appreciated.
Posted by Moab Cabin at 2:29 PM No comments: Links to this post