This is one of my favorite photos from the last week of September. Keith Ricatelli has just finished filling up the gas tanks in the bikes at the sun rises over the Moab rim. 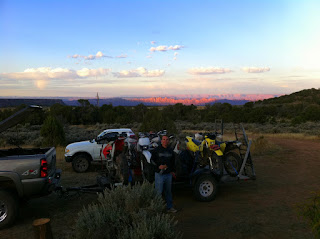 His Dad Paul, was cooking dinner inside the cabin and the photos plainly states, "Fun Ahead"

Fall colors on the road up to the Blue mountains. This area of the country, near Monticello Utah is not as well known as the Moab area, but the locals are well aware of the riding trails in the Blue mountains. The community of local riders have groomed the trails, and the attitude of the town bespeaks a welcome mat out to all off roaders. 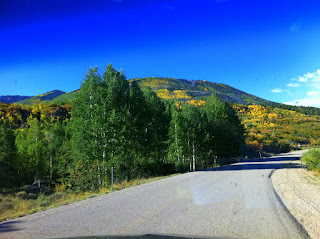 This is an iconic scene from the "Behind the Rocks" trail west of Moab. While this trail is rated difficult due to a few gnarly spots most of the trail is moderate and sandy. A couple of us did not have working headlights when the sunset and with the aide of a couple others riding close by we went all the way up to the cabin. 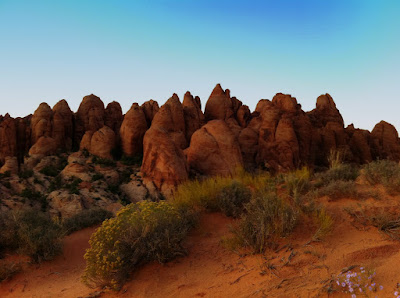 The beginning of "Behind the Rocks" trail at the southern end. This photo is a bit blurry but captures the vertical nature of this trail and spotters help the inexperienced make it up. 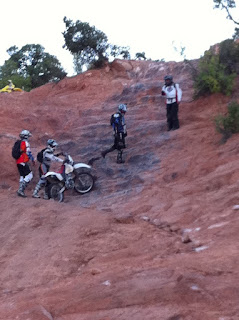 Looking North from the top of "Hazard Trail" out across the castle valley. Beauty is consistent but never common. 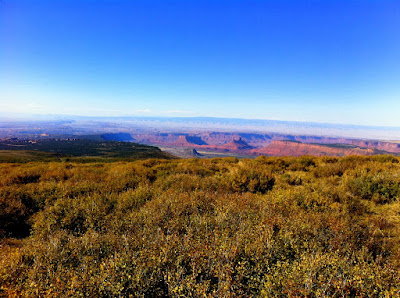 The view looking North from miners basin out over castle valley. Fall colors of yellow, Green and red against a blue sky make for a memory to last a lifetime. I always consider it a blessing to live in a day and age where we recreate in areas 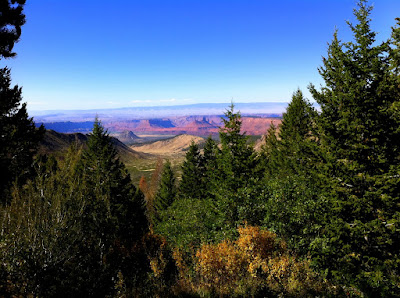 the pioneers struggled to survive. This scene is just one of many on this trail.

Miners basin lake in the fall. The water is clear and you can see to the bottom of the lake. The road to this lake is steep, loose rock, tight switchbacks and narrow, however it is beautiful all the way and worth the effort. The aspens turning yellow amongst the pines and image reflected off the water makes for special experience. 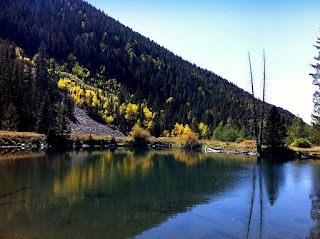 Terry Eagar Pinhook trail with Castle valley in the background. A forest fire 5 years ago cleared the way for new growth which is in great abundance. 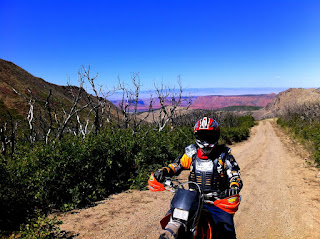 Posted by Moab Cabin at 4:48 PM No comments: 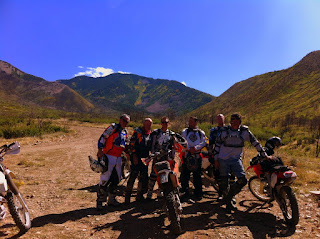 Posted by Moab Cabin at 6:55 PM No comments:

Looking East into the Pinhook battle ground cemetery at the upper end of Castle valley. Just beyond the ride in the middle of the valley is a cemetery, remnant of the last battle between whites and native Americans in the US. 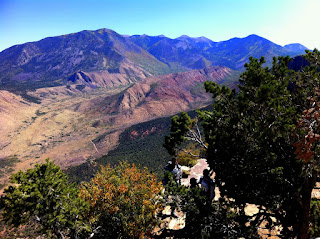 Posted by Moab Cabin at 6:53 PM No comments:

Owen Wilson, Ken Wong and Terry Eagar atop the white rock at the castle valley overlook. 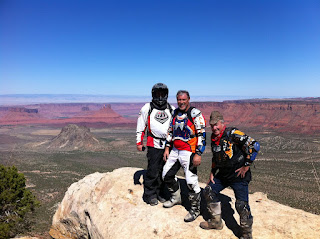 Posted by Moab Cabin at 6:51 PM No comments:

One of the entrances to the porcupine trail off the sand flats road. This is a popular trail for a variety of off road vehicles and should be traveled by guests on foot if they do not have an appropriate vehicle. The views are spectacular. 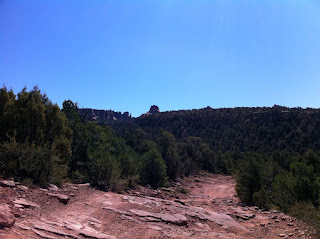 Posted by Moab Cabin at 6:50 PM No comments:

Dane Lundberg & Ken Wong at the castle valley overlook. Weather was perfect for riding and we traveled up and down the rim along the edge of castle valley. 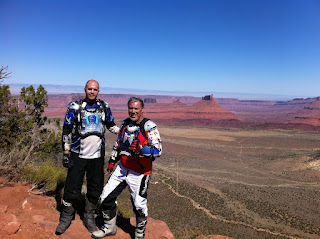 Posted by Moab Cabin at 6:45 PM No comments:

Terry Eagar at age "Over 70" still rides slick rock on his KTM. While he isn't as fast as he used to be he is still plenty fast and 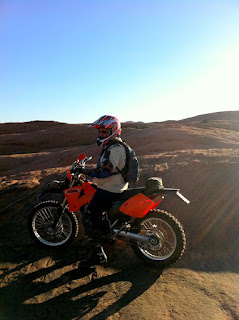 is my inspiration to keep riding into my old age. We started riding together over 20 years ago when I was young and thought he was old. I am now older than he was then and laugh when I consider the places he and I have been on a dirtbike. Most will never see the views we have from a single track trail somewhere in the back country, but for those that ride you know what I am talking about.

Posted by Moab Cabin at 5:29 PM No comments:

We didn't catch name of this gentleman, but we noticed he was older than the average rider and in talking with him, we found out the following. He is from Texas, 83, Eighty Three 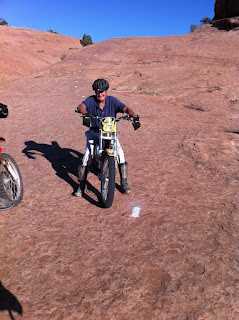 , rides a trials bike, doesn't have any friends that can go with him, (they have all died) and enjoys riding the slick rock trails. Says he can tell the end of his riding days are not too far distant as his balance is starting to wane a bit and doesn't want to go down where no one will find him. I am sick that we didn't get his name as I believe he is worthy of an ESPN feature story, doing what he is doing at that age. As referenced above, good friend Terry Eagar is over 70 and was beginning to whine a bit that he might be giving it up, but after talking to this tough Texan, we chided Terry into continuing on for at least another decade.

Posted by Moab Cabin at 5:23 PM No comments:

Some of my friends riding their dirtbikes through the Devils hot tub on top of Slick Rock. 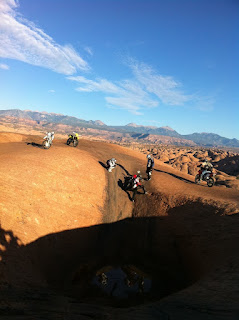 Posted by Moab Cabin at 5:16 PM No comments:

This is part of the jeep trail on slick rock park. The vertical nature of the trail makes for a lot of excitement and fun for both first time guests and experienced ones. Slick Rock is a must see and do while visiting the canyon. You can drive your own SUV, rent one, be a guest on a jeep/hummer tour, dirt bike, mountain bike or hike it. However you experience it, will be a memory for life. It just doesn't get any better than this. Beautiful views, well marked, close to town, exhilarating and just plain fun. 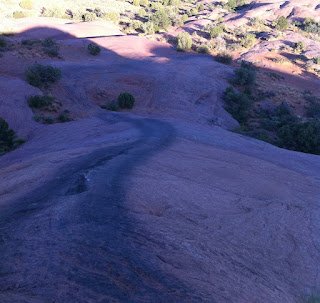 Posted by Moab Cabin at 5:15 PM No comments:

This is the love shack sitting on the edge of cougar canyon. The previous owners named it this name and despite our best efforts to change it and refer to it as something else, it always comes back to the "Love Shack" At this point it does not have plumbing or power but we are considering options on how to add both. No promises on when but we have looked at a couple different ways to make it more convenient to a guest. At present we just use it as a spare bedroom. 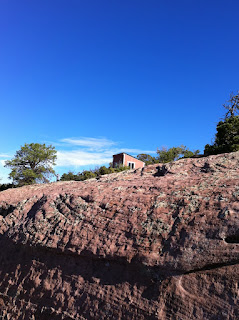 Posted by Moab Cabin at 5:10 PM No comments:

Looking at the sun filter through a tree at the bottom of cougar canyon in late September. Taken from the love shack. 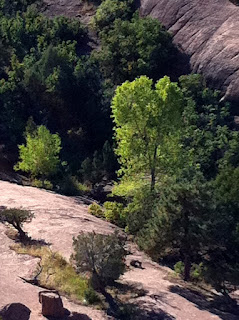 Posted by Moab Cabin at 5:07 PM No comments:

This is the view down into cougar canyon from the Love Shack, a secondary out cabin on the property. This is looking South just after sunup. The main cabin sits 600 feet to the East of this spot. 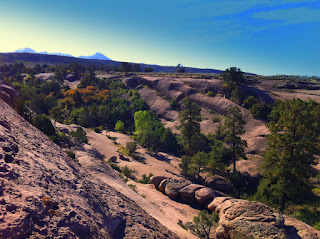 Posted by Moab Cabin at 5:06 PM No comments:

We have positioned a number of silk ropes down different walls of cougar canyon in order to go down and back up with ease. I am always surprised at how quickly I run out of breath at this elevation. At 7200 feet hiking the canyon is a challenge from someone coming from only 1500 feet. 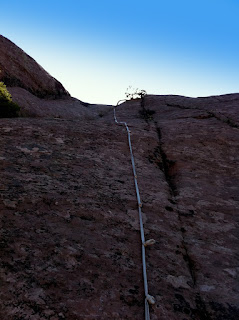 Posted by Moab Cabin at 5:03 PM No comments: 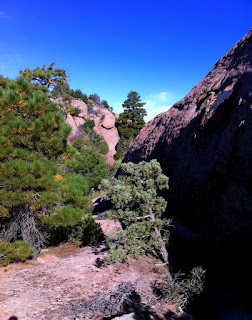 that sits on the rim. We use this cabin, referred to as the "Love Shack" by the previous owner as an extra bedroom. It is very comfortable with double and twin mattress bunk beds. It is due West of the main cabin by 600 feet and is one of our favorite spots. When friends, family, especially grandkids are still going strong late at night playing games, watching movies or in conversation and it is time to go to bed, the love shack is perfect.

Posted by Moab Cabin at 5:01 PM No comments:

A stream runs through the bottom of cougar canyon in Spring but only pools are left by Summer. A marshy area has prospered at the natural dam at this spot. We have seen cougar scat, and bear tracks at this spot. 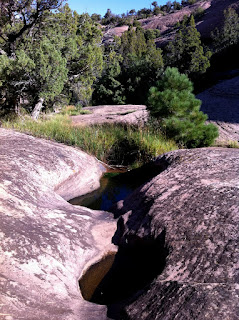 Posted by Moab Cabin at 4:57 PM No comments:

This small pool at the bottom of Cougar canyon has an entire eco-system of creatures living out their lives. The top predator is a salamander that hides in the shadows beneath the surface. 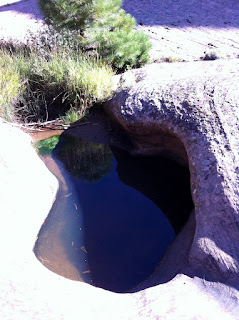 Posted by Moab Cabin at 4:55 PM No comments:

The Sand Flats road passes by this hoodoo we affectionaly call "Monte's Hoodoo". Monte Stiles of Monte Stiles photography climbed up on this hoodoo with my help. He stood on my shoulders in order make a hand grab somewhere high up. All went well, with him shooting pics of the vistas from this vantage point, until it was time to come down. Lets just say he made it but not without some luck. I believe he had to change his underwear shortly after coming down. The cabin sits on the back side of this hoodoo and both can be seen from the meadow across cougar canyon. 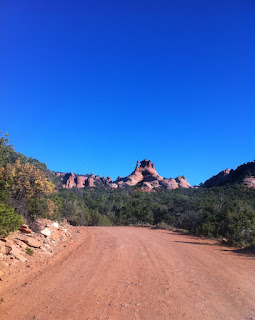 Posted by Moab Cabin at 4:53 PM No comments: