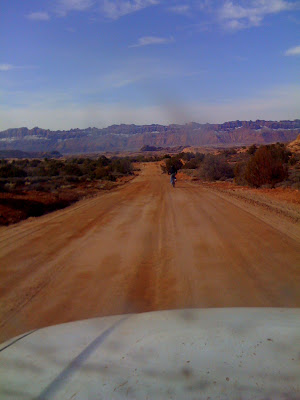 took advantage of one our trips into town to do a little biking. As we descended from the cabin at 7200 ft Torrin took his bike out of the back near the trail head for porcupine trail and for the most part coasted down a few miles. Smudgy photo because I took it though the windshield. The snow is non existent at the lower elevations and we counted 84 seperate vehicles parked along the campsites near Fins N Things and Slickrock. I don't remember seeing that many folks even in the busier parts of the year. Perhaps the recession has more people camping and the Moab area is the beneficiary. The two nights we spent in town to watch the basketball games at Zax pizza, the town was buzzing with people. Susie likes it that moab seems to be a vibrant little town. One secret when visiting Moab in the off season, is the Moab Brewery offers all their half pound hamburgers with all trimmings for $5.00 I had the bacon swiss cheese half pounder with fries and it was super.